It was the most intense basil scent I had ever smelled. 27,000 basil plants, as far as the eye can see… well not quite, as outside the greenhouse the early 20th-century factory buildings stood tall nearby, which made the sea of basil all the more surreal.

I was in Berlin, visiting ECF Farm Berlin, an urban farming project located on the premises of the former malt factory of the Schultheiss Brewery in the Schöneberg borough, not far from the historic Tempelhof Airport. There are other urban farming projects in Berlin but what makes this one special is that it’s aquaponics, a combination of aquaculture (raising fish) and hydroponics (growing plants without soil).

Adjacent to the 1,000-square-meter greenhouse with the basil is a building with 13 fish basins. The waste produced by the farmed fish supplies nutrients and fertilizer for the plants, which are grown hydroponically and in turn purify the water.

I felt strong gardener’s envy walking up and down the aisles between the large tables of healthy, bushy, pesticide-free basil plants. After several attempts to get a head start on the growing season, I haven given up on starting basil indoors. The seedlings get too leggy too quickly if there is not sufficient light.

Now the often grey and overcast sky over Berlin is also not exactly what sun-loving basil plants need. The solution at ECF Farm comes in purple. Whenever there is not enough sunlight, specially designed red and blue LED lights go on automatically, bathing the greenhouse in a purple hue.

The fish raised next door is Oreochromis niloticus, a tilapia species. But because tilapia in Germany, just like in the US, has a bad rap (which it really does not deserve, as an article in The Washington Post explained in detail last year) the ECF Farmsystems founders decided to refer to it as perch (“Barsch” in German). The fish is grown without antibiotics and with controlled density – 94% percent water, which in part is collected from rainwater runoff, and 6% fish. 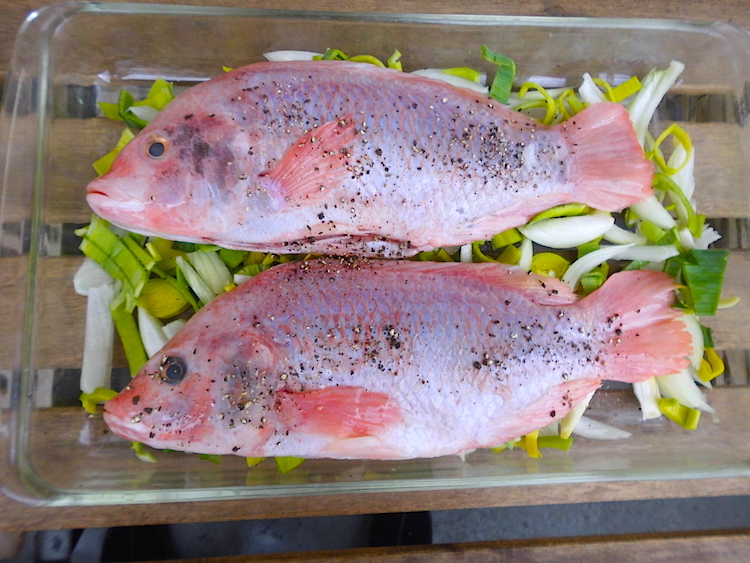 The REWE supermarket chain sells the Hauptstadtbarsch (Capital Perch) and 8,000 pots of the Hauptstadtbasilikum (Capital Basil) at its 140 stores in and around Berlin. The fish is vacuum-sealed and if stored at 2 degrees Celsius, it keeps for nine days.

8,000 pots of basil per week might sound like a lot even for a 3.5-million metropolis but it’s actually not when taking into consideration that Italian food steadily holds first place as the most popular foreign cuisine in Germany. Germans love to eat tomatoes, mozzarella and basil Caprese style year-around, and almost every supermarket in the country sells potted basil.

There is also a growing trend among consumers in Germany towards buying more regionally grown foods. Fish and basil from Berlin-Schöneberg are as local as it can get, and that does not only mean the food is fresh but also short transport ways. ECF packages its basil in molds and small sleeves which saves six metric tons of plastic waste per year. The Berlin project serves as a pilot for urban farms in other European cities.

I did not get to tour the fish basins but I got to eat the fish for lunch two days later. My friend who took me to see the aquaponics project asked me whether I seriously wanted to curtail my sightseeing time and stand in her kitchen cooking the fish during my only weekend in Berlin. I wanted to! 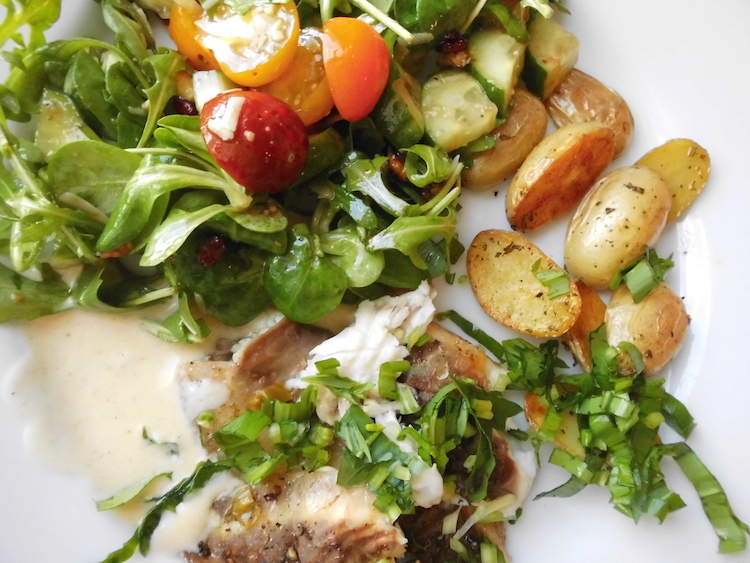 We broiled the fish on a bed of leeks and onions, dotted with good high-fat German butter and the first Bärlauch (ramsons in English, see my previous blog post about the difference between German Bärlauch and American ramps) from the beautiful Saturday farmers’ market at Karl-August-Platz in the Charlottenburg borough. The fish was delicious, with a very mild flavor and a fresh taste.

The only thing that was missing to make it all perfect were some good photos of our capital fish dish. I am admittedly a lousy photographer and my husband, who usually takes pictures for me, was staying behind in the US. He had to dig us out from almost two feet of snow that the mid-March blizzard dumped on our rural Pennsylvania country home while I was breathing basil in Berlin.

To those who put themselves at risk every day to keep our hospitals, supply chains, infrastructure and government running, thank you! To all others, stay home, stay safe, and stay sane. I have always found bread-baking very calming and satisfying. Judging from the empty shelves at the grocery stores everywhere, lots of people have a few pounds of flour stashed away. So why not bake some real German bread? Maybe even get your own sourdough starter going? It takes time but time is obviously not an issue right now, as we are going to be in this for a while. There are plenty of good instructions for sourdough starters online. And you can find a few of my favorite bread recipes on my blog, Spoonfuls of Germany. This is also a good time for the German recipes you’ve always wanted to try. If you have any questions related to German food and cuisine, feel free ask in the comments to this post, and I’ll be glad to answer them.