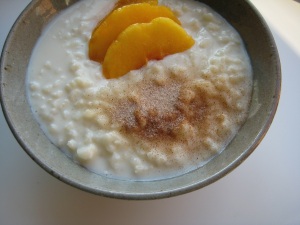 This is not what you might think. It is a simple and ingenious trick to cook the creamiest rice pudding. I learned it from my aunt on my last trip to Germany.

Rice pudding was one of my staple dishes as a student. It was cheap and filling, and I usually ate it the way it is often eaten in Germany: warm, sprinkled with cinnamon and sugar, and with peaches from the can. Getting it right is not so easy though. Like risotto, cooking rice pudding needs close attention so it does not scorch, and it often ends up too dry so you have to stir in additional milk after cooking, and more milk after the rice pudding cools and stiffens.

Not so in my aunt’s rice pudding. Actually it is not her invention but the way farmers’ wives did it. The rice is added to the boiling milk, cooked only briefly and then the pot is tucked in under a duvet or comforter and left for at least one hour. When you open the pot, all the milk is on top and you initially think it is a complete failure. But then you stir it and all the milk gets absorbed. The rice pudding stays nicely creamy even after chilling – no need to add any milk later.

Last week our daughter was home with a toothache. That and the delicious and juicy peaches from the local orchard (no more canned peaches for me) just called for rice pudding!

I fetched a duvet from its summer storage and made sure that the bedroom door was closed so the dog would not break into the makeshift cooker and for sure singe his nose – the pot was piping hot when I took it out. The rice pudding was so yummy that we gobbled up a large batch of it, and I made some more today. Nowadays I prefer rice pudding chilled, especially in the summer.

I think it’s not worth putting the duvet back in storage.

The recipe can be found in my cookbook Spoonfuls of Germany.

3 thoughts on “Cooking in bed”