Yesterday I went on a tour of the Rodale Institute and came home fully charged with new ideas. But today is a dreary, rainy Sunday – a perfect day to take care of what’s already there: the first big batch of tomatoes for sauce.

Unlike the grape and cherry tomatoes from my garden, the big tomatoes often look rugged. But in organic produce looks don’t matter. I use the prettiest tomatoes for eating raw and the majority goes into sauce for freezing.

My recipe for tomato sauce is based on 16 pounds of tomatoes (making approx. 12 pounds skinned and seeded) so even if you are a mathematical dummy like me, it’s easy to adapt the recipe for a smaller amount, especially because the amount of herbs and brown sugar is up to taste.

The crucial thing is to start with good, ripe tomatoes, and simmer the sauce uncovered for several hours.

I freeze the sauce in 1-quart freezer bags that I place flat on a baking sheet or tray until frozen (this way they can be stacked and take minimum space in the freezer). A way of getting the sauce even thicker later is to place the frozen bag in a bowl to thaw it slowly, pouring off the clear liquid that drains from the frozen sauce. 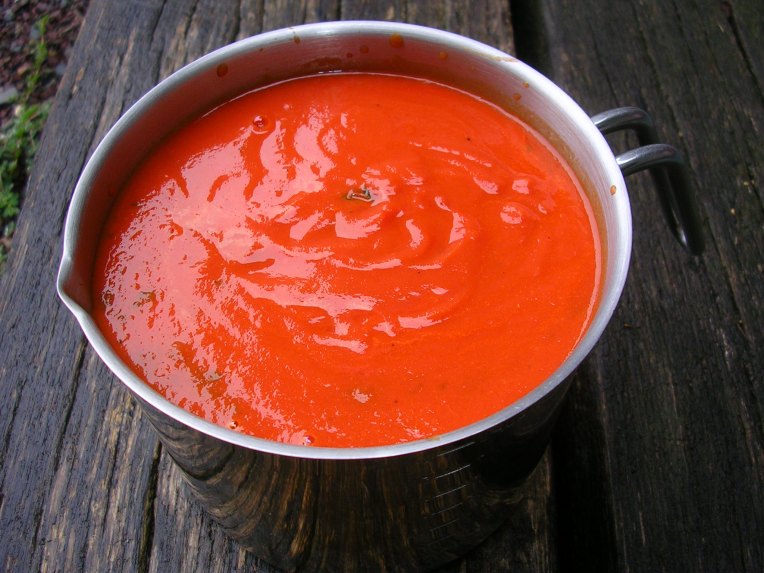 1. Bring water to a boil in a large pot. With a sharp knife cut a small X in the bottom of each tomato. Place the tomatoes in batches into the boiling water. When the skins start to curl after a few minutes, remove the tomatoes with a slotted spoon and place in a bowl of cold water. When they are cool enough to handle, remove the skins and cut out the core. Do this over a bowl in order to catch all the juices.

2. Coarsely cut the tomatoes (again over the bowl) and pass them through a food mill. This is a bit of a messy job but please resist the temptation to use a blender or a food processor to puree everything because the seeds have a slightly bitter taste and will affect the taste of the sauce.

3. Heat the oil the pot and cook the onions for 10 to 15 minutes until translucent yet not browned, stirring often. Add the skinned and seeded tomatoes and the salt and cook uncovered for 3 to 4 hours, stirring occasionally. If using dried oregano or basil, add it during the last hour. The sauce is ready when it is visibly reduced and thick and the olive oil separates on the top. Add brown sugar and pepper to taste.

4. Remove from the heat and let cool slightly. Puree the sauce with an immersion blender or in batches in a food processor. If you use fresh basil, add it now. Let cool completely before freezing.

One thought on “Time for tomato sauce”