A cookbook that holds a special place in my collection is Delights from the Garden of Eden: A Cookbook and a History of the Iraqi Cuisine by Nawal Nasrallah. I have the first edition from 2003, a hefty, 650-page book that was self-published and printed in black and white (it was later released as a hardcover with color photos). It’s a book that I turn to when I need to get grounded again about food and cooking. Everything these days is so overheated, short-lived and hyper, and the social media attention keeps moving from one food trend and snippet and Instagram photo to the next within split seconds. Reading a page, or even just a paragraph, about Mesopotamian civilization that goes back to 6,000 BC, to the dawn of recorded human history, helps me to cool it and put things back in perspective.

After an article about Nawal’s book appeared in The New York Times in April 2003, less than two weeks after the US invasion of Iraq had started, I immediately bought a copy. The recipe for Sweet and Sour Salmon Simmered in Almond-Prune Sauce became part of my standard dinner repertoire. I found Nawal’s book a welcome reminder during the long years of the Iraq War that it is a country with a long rich civilization and not merely a battlefield.

I connected with Nawal in the summer of 2004 when I was trying to find a co-author for a beginner’s guide for the Iraqi Arabic language. Nawal had been a professor for English at the universities of Bagdad and Mosul before escaping to the US with her family in 1990. She agreed to work with me, and for more than a year, we collaborated closely on the book.

Nawal and I only met in person once, but we’ve stayed in touch, and have followed her successes and other explorations into Arab cuisines. In 2007 Delights from the Garden of Eden was a Gourmand World Cookbook Award winner and has received numerous other accolades since then. Also in 2007, Annals of the Caliph’s Kitchen was published, Nawal’s English translation of Ibn Sayyar al Warraq’s tenth-century Baghdadi Cookbook Kitab al-Tabeekh. Dates – A Global History, followed in 2011. Most recently Nawal contributed a piece about “Eating Right in Medieval Baghdad” to Eaten Magazine. She also writes a blog; one of the posts that I find particularly fascinating is about Khirret, a pollen-based candy from the marshes of southern Iraq.

Nawal has established herself as an authority on the history and culture of Arab food. She worked with an interdisciplinary team from Harvard and Yale that tested 4,000 year-old Babylonian recipes from the only three remaining ancient cuneiform (clay) tablets, which are world’s oldest known recipes (you can watch the video of that event here).

Today, in 2019 we are able to calculate our Body Mass Index and fine-tune our diet with smartphone apps down to the gram. But all of that all doesn’t do anything for our wellbeing if we don’t live by the epigraph that Nawal put in the introductory chapter of her Iraqi cookbook, a Sumerian proverb from 3,500 BC: “He who eats too much will not be able to sleep.”

Adapted from Delights from the Garden of Eden: A Cookbook and a History of the Iraqi Cuisine by Nawal Nasrallah

The original recipe is with spinach or Swiss chard. While I am usually a big fan of Swiss chard, in this dish, I prefer spinach.

1. In a mortar, pound the garlic with the salt to a paste.

2. In a saucepan add spinach with the water clinging to it. If using frozen spinach, add it unthawed, it will release liquid as it heats. Let wilt over medium heat, stirring once or twice to prevent it from sticking to the bottom of the pan. Sprinkle with cold water so the spinach retains its bright green color. Let drain in a colander and squeeze to remove excess liquid. Chop finely.

3. In a big bowl mix spinach with the rest of the ingredients. Stir well to combine and refrigerate for 1 hour before serving. 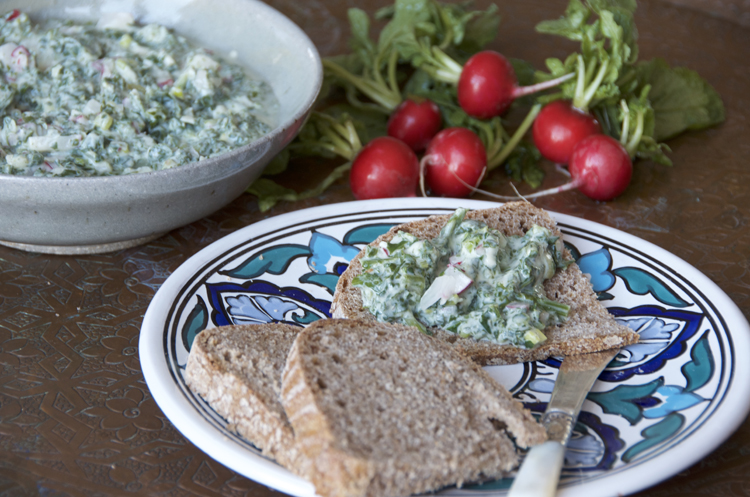 Adapted from Dates – A Global History by Nawal Nasrallah

Almost every Arab cookbook has a recipe for ma’moul. These popular cookies are usually made with butter. I had been looking for a recipe with oil for a long time when I found Nawal’s. As I am cutting down on white refined flour as much as possible, I swapped half of the all-purpose flour for whole wheat flour. You need a wooden ma’moul mold for this recipe, which can be found at Middle Eastern grocery stores.

Addendum: Since we liked these cookies so much, and because the topic of the Food in Jars Mastery Challenge 2019 in April is Use Up Last Year’s Preserves (aka UseTheDamnJam), I tinkered with the recipe and filled the cookies with a mix of homemade jam and walnuts, see Filling 2. I used my chunky quince jam and walnuts but any other firm jam and other nuts will work well too. Depending on the type of jam you use, you might want to leave out some of the spices, or use others. I also added a little honey to sweeten the filling. And instead of using a ma’moul mold, I simply shaped the cookies into half circles. 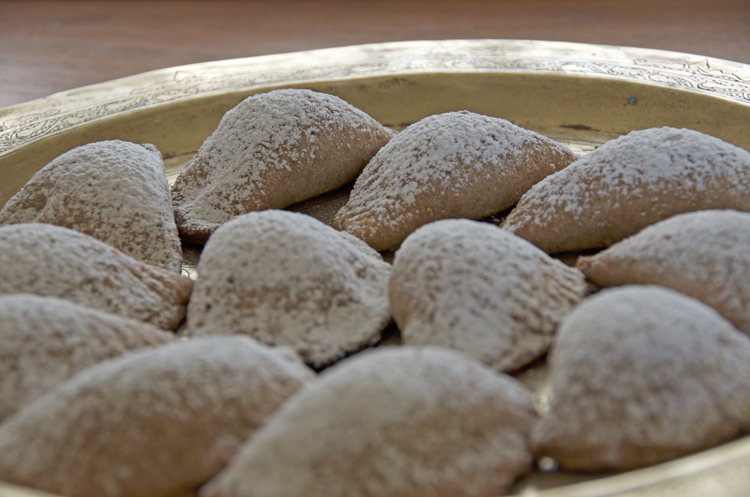 2. Toast the sesame seeds in an ungreased pan over low heat until lightly browned, stirring often so they won’t burn. Set aside.

3. In a bowl combine all the dry ingredients of the dough. Pour in the oil and rub the mixture between your fingers until it resembles breadcrumbs. Add water and stir in a circular movement to incorporate liquid into flour. Then knead on a clean work surface for about 5 minutes until dough is smooth and pliable.

4. Filling 1: Finely chop the dates in the food processor. Add the melted butter and process until it forms a paste, scraping down the sides of the food processor bowl. Add the remaining ingredients and mix well. Shape the filling into 24 balls of equal size (spray your hands with water if sticky).

Filling 2: Toast the walnuts in an ungreased pan over low heat until lightly browned, stirring often so they won’t burn. Let cool. Put jam and cooled walnuts in the food processor and chop finely. Add the melted butter and honey if using and process until it forms a paste, scraping down the sides of the food processor bowl. Add the remaining ingredients and mix well. Transfer the filling to a bowl and place in the freezer for 15 minutes to firm it up, then shape into 24 balls of equal size (spray your hands with water if sticky).

5. Divide the dough into 24 equal pieces. Shape each piece of dough into a circle about 3 inches (7.5 cm) in diameter, flattening it with your fingers.

If using a ma’moul mold, place a piece of filling in the center of the circle and enclose the filling, gently stretching the dough if necessary. Seal well so no filling shows. Proceed the same way with the remaining dough and filling. Press the filled cookies into a lightly floured ma’moul mold and tap them out. If the mold gets clogged, clean it with a dry pastry brush between cookies. Place the cookies flat side down on the baking sheet.

If not using a mold, place a piece of filling in the bottom half of the circle and fold it over to form a neat half circle. Gently press down on the seams with your fingertips to seal, and indent the rounded side several times with the tines of a fork or your index finger. Place the cookies on the baking sheet, leaving about 1 inch (2.5 cm) distance between them.

6. Bake in the preheated oven until golden brown, 20 to 25 minutes. Let cookies cool slightly on a wire rack, then dust with confectioners’ sugar. Let fully cool before storing in airtight containers. 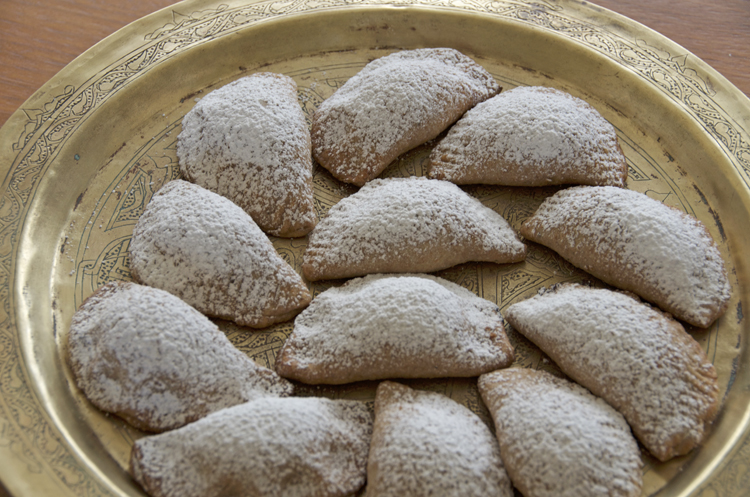 Highly recommended against 1st covid vaccine aches and pains: miso soup with locally grown mushrooms, spinach, and the first chives and ramps from my garden. I added too much homemade chili garlic oil and it was too spicy for my husband, who popped a chicken pot pie from @kreektreefarm (our emergency dinners) in the oven. I just ate both bowls all by myself.