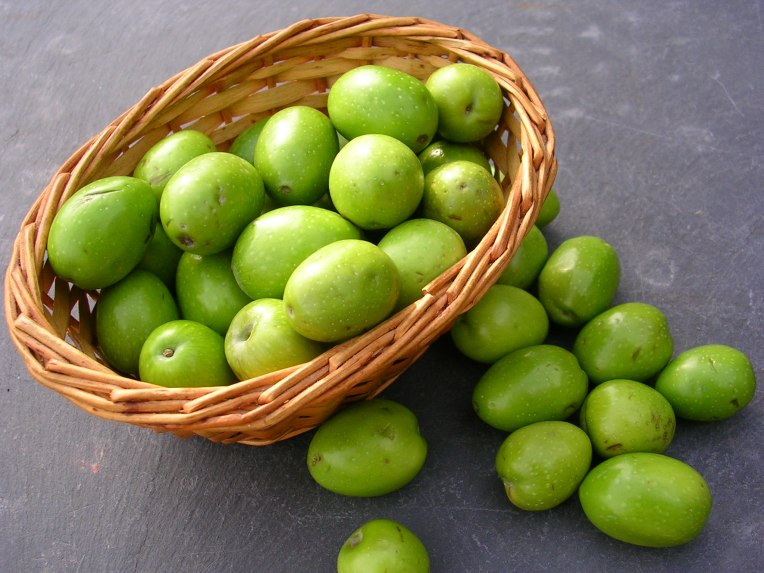 Pomegranates and olives are the two things that I associate the most with my Tunisian grandmother. Of course I cannot grow either in my Pennsylvania garden so when I saw fresh olives for sale the other day I could not resist buying some to try my hand on brining them.

Those olives brought back vivid memories of my grandmother. Most of them have to do with food, as I did not speak a word of Arabic as a child, and my grandmother did not know French. And, like most women of her generation, she was illiterate. She basically communicated with me through food. I remember her putting things on my plate, and when she realized I liked it, she nodded or chuckled, or both, and put more on my plate.

My grandmother’s cooking was as Mediterranean as they come – no dairy whatsoever. Before trips to Tunisia, I remember my mother buying gingersnaps for her at a spice store in downtown Frankfurt, a place where she usually never shopped. In the 1970s, gingersnaps were something very exotic for Germany, and certainly not cheap. I tried one and found it awful (today I love gingersnaps) but my mother told me that these were the only cookies my grandmother liked and was able to eat. It only occurred to me now that she had a milk allergy.

At my grandmother’s house in Ksar Hellal, a town in the Tunisian coastal area called the Sahel, the meals were taken in the large courtyard. We sat on straw mats, with the starry night sky as the ceiling. You could faintly hear voices and music from neighboring houses, and cooking smells wafting over, yet it felt ultimately private.

The middle of her courtyard had a small, rosette-shaped elevated garden with an orange tree, a pomegranate tree, and some turtles roaming around. My grandmother knew how much I loved pomegranates, so each time she came to visit us in Germany, usually in the winter, she brought me pomegranates from that tree. 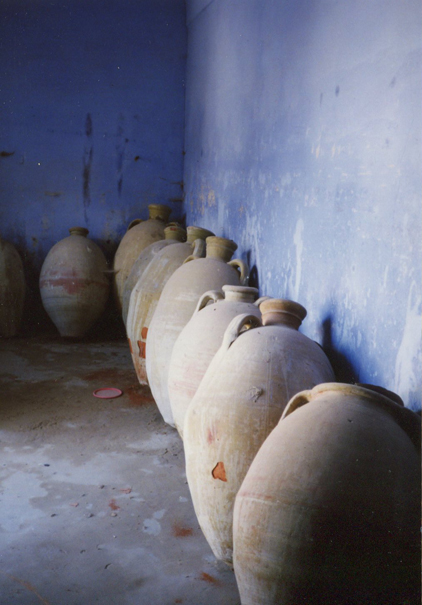 Olives, especially olive oil, was omnipresent in her cooking. The greenish oil was so thick that a spoon could stand in it. Like all her other provisions, she kept the olive oil in earthenware amphora, neatly lined up in the long narrow storage room. The olive oil came from the family’s olive groves and she used it for everything, from frying thick wedges of potatoes to her delicious hot pepper sauce, which was much milder than harissa, and which I never managed to fully recreate. She did not distinguish between light olive oil for cooking and the thick cold-pressed grade.  I never use extra-virgin olive oil for cooking, I find its flavor too strong, but back then I did not mind. Then, of course, there is the price issue. Good extra-virgin olive oil is expensive. Early this summer I finally found a mail order source for Tunisian extra-virgin olive oil. I bought three liters thinking it would last us a whole year. We were out after a few months and I recently had to reorder.

My grandmother also made her own olive soap. I still have one of those irregularly shaped chunky bars, and I never thought of using it because it is one of the few objects that connect me to her. When I went to her house ten years after she died, I took as many photos as I could. The house was deserted and clearly falling apart. For a short while I hoped I would be able to save that gem, with its beautiful Moorish tiles, its wrought-iron windowpanes, and its sleeping alcoves with elaborate multi-colored woodwork frames. But renovating it was too big of a task for me at a time when I was just starting my career. Then, life took me elsewhere and, eventually, to the United States.

Brining olives takes time. Mine are still at the stage where I need to soak them in water and change it daily to remove the extreme bitterness. I hope it will work out and I will end up with tasty olives in a couple of months so I can post the recipe. (Update, January 2012: The cured olives failed, they were awfully bitter. I will rely on the pros for olives but it was fun to try).

In the meantime, all this thinking and reading about olives put me in such an olive mood that I concocted a quick salad with olives, using leftover chickpeas and sun-dried tomatoes from the garden. This is, like most salads in Arab and Middle Eastern cuisines, a compact affair, small and filling, like Tabouleh. 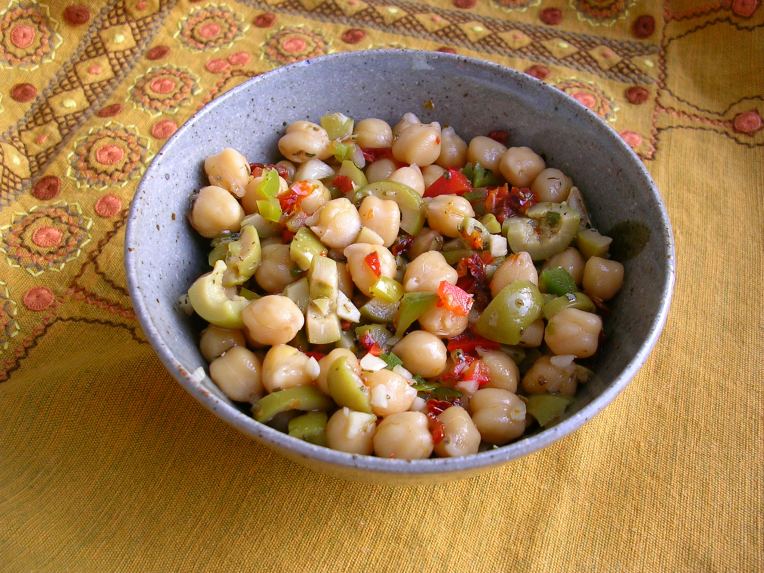 Mix all ingredients. Let sit a few hours before serving. Refrigerate if not serving the same day. Serve at room temperature.

Two more showy lady’s slippers (Cypripedium reginae) appeared in our woods this year. Seeing this rare and elusive native north American orchid bloom is one of the highlights of spring for me. #nativewildflowers #nativeorchids #ladyslipperorchid #woodlandplants #pennsylvaniaisbeautiful