Last weekend we ate a portion of our crown jewels. That’s how I refer to the three quart-size bags of gooseberries that I put in the freezer last summer.

Stashed away between more humble freezer residents like Swiss chard, zucchini soup and blueberries, the gooseberries are my most prized frozen possession for a number of reasons. END_OF_DOCUMENT_TOKEN_TO_BE_REPLACED

There is no other way to say it: growing gooseberries is a pain. The bushes with their long thorns are outright dangerous. Wearing sturdy gloves when picking the small berries is not really an option so harvesting them often leaves me with deep scratches on my hands and lower arms. My husband still has a few scars on his calves from the time when he moved a row of raspberries nearby and the gooseberry thorns pierced through his jeans. Also, removing the minuscule blossom ends and stems takes forever but it has to be done, otherwise the pie, compote or whatever you make tastes grainy.

Wouldn’t you know it that of my three gooseberry bushes, the cultivar with the largest berries and the easiest to pick, Invicta, yielded exactly four (4) gooseberries this year. Meanwhile the other two cultivars, Hinnonmaki Red and Pixwell, are filled with tiny berries. They are tastier than the hairy Invictas so that’s at least one trade-off for being more labor-intensive.

Initially I was leaning towards tossing the entire 3½ pounds of gooseberries without any tedious preparation into the steam juicer to make gooseberry jelly. But then my culinary curiosity took over and I wanted to try something new, special, and hopefully delicious.

I have always wanted to make gooseberry chutney. When I saw that the recipe for Gooseberry Relish by food writer Edward Schneider in the The New York Times is made with only five ingredients, including elderflower cordial, I had found my inspiration. What a perfect reason to pop open the first bottle of my elderflower syrup!

For a moment I was slightly concerned about the relish being suitable for canning, as the recipe does not mention this option. After all, I want us to savor the relish in the winter and not now, in the midst of fruit cornucopia. But after consulting with my dietitian friend, I was reassured that the gooseberries contain enough acidity to make canning safe.

The other recipe I tried was Gooseberry Chutney, to which I added elderflower vinegar.

I have barely started to harvest from the third gooseberry bush. Soon I will be out there again picking, wincing each time I hit a thorn. But the fact that I can just walk into the garden, while other people hungry for gooseberries hunt them down at farmers’ markets, makes me appreciate more what I have. Also, with the taste of that delicious gooseberry relish and chutney still lingering on my tongue, I know again what I’m doing this for.

1. Peel the ginger, cut it in half lengthwise and slice it thinly. Tie it into a piece of cheesecloth, together with the mustard seeds, and secure the bag with butcher twine.

2. Place the bag in a heavy saucepan with the gooseberries, the sugar and the elderflower syrup. Stir to mix and slowly bring to a boil, then reduce the heat and simmer uncovered for about 1 hour, until the relish thickens. Stir every now and then, more often as it thickens, to prevent the relish from sticking to the bottom of the pan. Towards the end, check for sweetness and add brown sugar to taste.

3. Discard the ginger bag. Fill the piping hot relish in sterilized jars placed on a damp kitchen towel. Wipe the rims of the jars with a damp piece of paper towel to remove any drips. Place the lids and the bands on the jars and process in a boiling water bath for 10 minutes.

4. Let cool and set for 24 hours without moving the jars.

1. Put all the ingredients in a heavy saucepan. Stir to mix and slowly bring to a boil, then reduce the heat and simmer uncovered for 45 minutes to 1 hour, until the chutney thickens. Stir every now and then, especially towards the end, so it won’t scorch.

2. Process in boiling water batch as described in the Gooseberry Relish recipe above.

I used to treat gooseberries like other people treat a fine tablecloth or china – they don’t get taken out unless for special occasions. So all spring, I held onto the last bag of frozen gooseberries from last year: large light green, plump Invictas, perfect for cake or pie. But with the branches of my three gooseberries bushes loaded with fruit, which will ripen in late June/early July, all my restraint disappeared and I felt emboldened to roll it out. However, not for a cake but for chilled gooseberry soup.

Fruit soups are one of my favorite summer dishes. To give them more substance, I like them best with a little addition, like my Elderberry Soup with Farina Dumplings. For the gooseberry soup I wanted something lighter. I took my cues from floating islands and added bit of crunch by sprinkling them with toasted caramelized almonds. The soup should be eaten thoroughly chilled.

Many gooseberry recipes call for under-ripe gooseberries but for this soup they should be as sweet as possible, otherwise you will have to add much more sugar. As the gooseberries are put through a food mill, you can save yourself the effort to remove the tiny blossom ends and, if still attached, the stems, both of which are a bother in most gooseberry dishes. Please resist the temptation to puree the soup in the blender, as the crushed seeds will give the soup a coarse consistency and a slightly bitter taste.

Pinch of cream of tartar

A few drops of almond extract

1. For the soup, please all the ingredients except the cornstarch in a large heavy saucepan and bring to a boil. Cook until the gooseberries soften and pop, stirring occasionally. You may also crush them with the cooking spoon to fasten the process.

2. Pass the soup through the food mill (medium or fine disk). Pour the soup back into the pan.

3. Dissolve the cornstarch in a few tablespoons of cold water. Whisk it into the soup and bring to a boil, whisking constantly. Cook until the soup turns clear again and thickens. Remove from the heat and cool, then chill.

4. For the floating islands, beat the egg whites with the salt and the cream of tartar until they are very stiff, gradually adding the superfine sugar.

5.Bring water to a boil in a very large deep pan or a wide pot. The floating islands should not touch each other when they poach so you might have to do this in two batches.

6. Reduce the water to a simmer. Using two dessertspoons, place small mounds of egg whites on the water. Poach for 3 minutes, then turn them over and poach for another 3 minutes on the other side. Remove with a slotted spoon and place on a large plate or tray lined with wax paper. Refrigerate.

7. For the almond crunch, lightly toast the almonds in a pan. Add the sugar and caramelize, making sure not to burn it. Remove from the pan and let tool. Chop the almonds in the food processor using the pulse function.

8. To serve, whisk the chilled soup well. Place the chilled floating islands on top and sprinkle with almond crunch.

Things are not going too well in the garden. The cucumbers, zucchini, and possibly also the Charantais melons have been struck by the striped cucumber beetle, the squash vine borer, and who knows what else. Last year my entire harvest of winter squash was wiped out and I had to dump 80 beautiful, perfectly shaped little Delicata squashes that did not ripen because the plants suddenly wilted and died.

While I am anxiously awaiting the arrival of the organic pesticide I mail-ordered, the line-up of canning jars from this summer reassures me that it already has been a successful gardening season no matter what lies ahead. 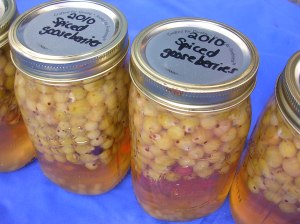 When I first made the spiced gooseberries a few years ago, it initially looked like a complete failure. The kitchen smelled like a pharmaceutical lab, and the concoction tasted like the worst kind of cough syrup. I was mad at myself for wasting a large basket of gooseberries, several bottles of rum, whole vanilla beans, and quite a chunk of time on this. But the original recipe said to let the jars sit for two months.

When I opened the first jar in September, I was stunned. This was absolutely delicious! A very subtle spice flavor, and just a hint of rum. It is a treat on vanilla ice-cream, which is the way I have served it to numerous guests (I have tweaked the recipe a bit over the years). Everyone loved it although I always make sure that whoever comes for dinner likes gooseberries, or is at least eager to try new things. Because while gooseberries do well in this climate and I always get a good harvest from my three bushes, I am not willing to waste my treasures on culinary ignoramuses…

A canning pot, or a very large stockpot

2. Bring the sugar with 2 cups water to the boil in a large saucepan. Add the bee balm and lemon balm leaves. Turn off the heat and let steep for while you prepare the jars.

5. Strain the syrup and return it to the pan. Bring to a boil, then reduce the heat and simmer for 10 to 15 minutes until reduced to a light syrup. Add the rum and bring the liquid back a boil.

6. Pour the boiling syrup over the gooseberries, leaving about ½ inch headspace. Wipe the rims of the jars with a damp paper towel, then wipe them dry (this is to assure a good seal). Place the lids on the jars and screw the bands on tightly.

7. Process the jars in a boiling water bath for 20 minutes. Carefully lift the jars out of the water and place them on a damp kitchen towel.

8. Let sit undisturbed for 24 hours, then store the jars in a dark cool place. Let the gooseberries sit for two months before opening. If the jars are properly sealed (the lids should not give when you press them down), the gooseberries will keep for more than a year.